What if you were able to describe your data central tendency, variation, and shape and compare it to other processes all with one simple graph? We will describe how this can be done with a box plot.

Overview: What is a box plot?

The box plot, also referred to as a box and whiskers plot, was introduced in 1970 by Dr. John Tukey, an American mathematician and statistician.

A box plot is constructed of two parts, a box and a set of whiskers as shown below. The lowest point is the minimum value of the data set and the highest point is the maximum value of the data set. The box is drawn from its first quartile (Q1) to its third quartile (Q3), with a horizontal line drawn in the middle representing the median. The plot can be either horizontal or vertical in orientation.

Here are some definitions of the elements of the box plot.

In the definition of max and min above, it stated that these were the max and min values excluding outliers. What does this mean? We will use the box plot below to explain it. 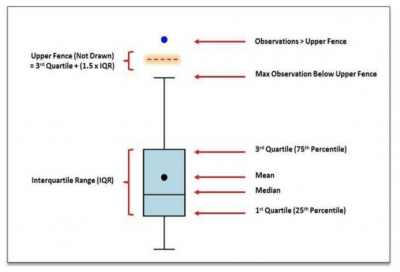 Elements of a box plot 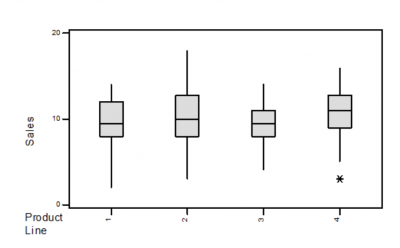 Here is a box plot of sales by product line. Here are some typical questions you might ask that can be answered by the box plot.

3 benefits of a box plot

Overall, the box plot provides a lot of information in a single easy-to-read graph. Here are some specific benefits of the box plot.

1. Visual summary of the data

When displayed on a single graph, different box plots can be compared with respect to the location of the median, amount of variation, skewness, and outliers. This allows for a quick and simple visual comparison and directional indicator. It does not substitute for a more rigorous statistical comparison.

3. A picture is worth a thousand words

Almost anyone, regardless of organizational level or education can understand and be able to answer questions about a box plot.

Why is a box plot important to understand?

As a summary graphic, understanding what the box plot is telling you about the data can serve as an initial look at central tendency, variation, and shape of the data.

It is a graph and not a statistical analysis

While the box plot is useful as a visual description of the data, it is not a rigorous analysis.

The definition of outlier in a box plot

It is important to understand that the definition of an outlier in a box plot is not a strict statistical computation. It should be interpreted as an opportunity to learn something about the process rather than an absolute determination of an unusual value.

Orientation of the box plot

Whether the box plot is drawn horizontally or vertically doesn’t matter since the interpretation will be the same.

An industry example of a box plot

The finance manager of a company was interested in the number of invoices her billing department could process in a day. Since she managed the billing department in five different locations, she had her Six Sigma Black Belt collect data for a month and then report back to her.

Below is the box plot the Black Belt used to display the data. 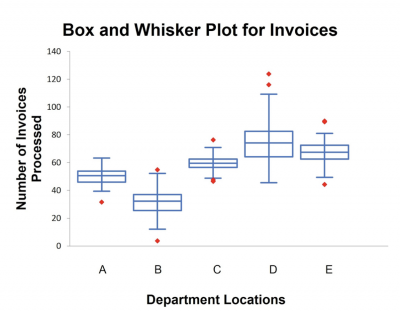 When the Black Belt was asked to interpret the graph for the finance manager, this is what he summarized:

He suggested the following actions be taken:

4 best practices when thinking about a box plot

It’s rare that you will be constructing a box plot by hand since many computer programs will do it for you. Here are a few things to think about if you choose to do a box plot.

Although the box plot orientation can be either vertical or horizontal, it is most common to do it vertically. This would allow your Y values to be on the vertical axis and your X categories on the horizontal axis.

For the box plot to be meaningful, be sure you have an adequate sample size, generally more than 20.

3. Use both average and median on the graph

Most statistical programs will allow you to put both the median and mean on the box plot. This will help with the determination of whether there might be skewness in your data.

4. Be sure to order your data high to low, or low to high

When calculating your Q1 and Q3 values, the data must be sequenced so Q1 and Q3 accurately represent the 25th and 75th percent of the data.

While many statisticians seek to provide a statistical explanation, the truth is Dr. John Tukey, the developer of the box plot, answered the question by saying, “Because 1 is too small and 2 is too large.”

It provides a graphical description of your data by showing the median, variation, shape, quartiles, and outliers.

3. How do I compare multiple sets of data?

The box plot is a simple graphical representation of your data. With it, you can understand the central tendency, shape, and variation of your data along with any unusual data points or outliers.

It is a great tool for comparing different data sets. But, keep in mind it is a graphical tool and not a rigorous analytical look at your data.