While the term “spread” is used in food applications and describes how a product is distributed across, for instance, a slice of bread, we will describe spread in terms of statistics and variation. We will present 5 common methods of calculating the spread of your data.

Overview: What is spread?

Spread, in the context of statistics, describes the variation of your data and how dispersed or spread out it is. This spread is often expressed in terms of your data’s departure from the central tendency of your data.

Let’s describe each of these.

An industry example of spread

Traditionally, a small electronics company only reported out the mean, or average, for most of their performance metrics. One day, the chief engineer came across a 1998 Annual Report for GE that he found very informative.

In it, they said the following: “…the mean never happens…The customer only feels the variance…Variation is evil in any customer-touching process.”

Going forward, the engineer reported not only the average for his metrics but also the range, standard deviation, variance and interquartile range. Below is the output he presented. This allowed for a deeper understanding of the variation or spread of his data. 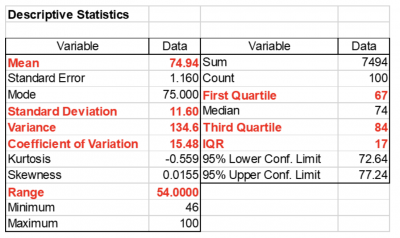 The boxplot is a graphical tool in which the “box” refers to the use of the interquartile range to display the variation of 50% of the data.

2. Why would I use the variance instead of the standard deviation?

The variance needs to be used for any mathematical calculations with respect to variation. On the other hand, the standard is more practical because it is expressed in terms of the original units of the data, while the variance is expressed as units squared.

3. What is the coefficient of variation?