Editor’s note: In a previous article, author Lindquist describes what a gemba walk is. Here he presents three examples of gemba walks.

Gemba walks at Fairbanks Morse Engine demonstrate the importance of the sometimes-overlooked basics of process improvement.

Observation: The objective of a series of events held at a particular manufacturing site of Fairbanks Morse Engine was to reduce operator travel and co-develop more efficient work areas for operators. Each gemba walk is unique to the particular machine and its staff, so that some machining centers at the site had been visited many times before; the walks showed signs of sustained changes. When doing the gemba walk with the Pama (a computer numeric control boring and milling machine) machining center, however, it was a different story.

All three shifts (one individual per shift) were brought onto the day shift for the purpose of observation. A Kaizen event kicked off the gemba walk with a safety orientation from the event leader and then a talk from Fairbanks’ safety expert. While engaging in open dialogue with an eye for safety throughout the area, participants asked to see how the operators completed tasks related to the safety issues. This grew into a discussion about how the operators used the layout.

Eventually the team realized that items the operators use throughout the day needed to be organized closer to the actual point of use and the layout could be changed to better suit their safety needs. As shown in Figure 1, the yellow guardrail was moved to eliminate notch (floor space that was used as storage – wasted space) and maximize usable space; an additional workstation was also installed to reduce the need for operators to walk as much.

Value-add location: Next some typically-expected changes (such as capturing the numerous setups using video technology, moving utilities to better locations and adding curtains to prevent unsafe entry to the area) were accomplished. The team consolidated tools and cleaned the machine. Why could this not have been accomplished without a gemba walk? All the team members started with was an area drawing and a vision to move tools closer to where they were used. The drawing, however, was out of date and provided no insight as to how work was completed in the area. The operating data said the operation mostly met cycle time. Doing the gemba walk revealed a far richer environment for improvement with safety fixes, layout changes and 6S (sort, stabilize, shine, standardize, sustain and safety) activities. In fact, prioritizing what could be accomplished in the gemba-walk week was more of a challenge because the team saw so much potential for improvement.

Handpicked Content:   Balancing Production and Planning in a Lean Environment

Teaming: The supervisor, engineering staff, maintenance team and operators all engaged in gemba walks and improved the area together. As subsequent gemba walks were performed, the teaming nature of the approach led to the additional development of a visual control plan for simplified communication and easier maintenance, and to make explicit what to check and communicate conditions needing help from supervision or maintenance.

How did this happen? Despite the tension among competing interests – operators’ needs not being met so they could produce value, supervisors’ need to determine abnormal operation at a glance, the maintenance team’s need to understand the area standards and the continuous improvement program’s need for change sustainment – all required a common communication vehicle.

The team settled on adapting the defect map concept by walking around the area to see the changes and how they wanted the changes to work going forward. The idea was then refined to have two components: 1) the visual defect map to show where to look (Figure 2) and 2) the shift check sheet, which operators complete but supervision and maintenance react to when abnormalities beyond their ability for correction are identified (Figure 3). This served everyone’s needs by allowing for interaction within the area on vastly different time schedules, yet still communicating the key elements. The subtle, although important, change this introduced was a near perpetual gemba walk around the area. To guard against the blind spots from mental models (that is, preconceived ideas about how the process should work), gemba walks by the continuous improvement team, including management, help open participants up to the improvement cycle again should the team get stuck in a rut. 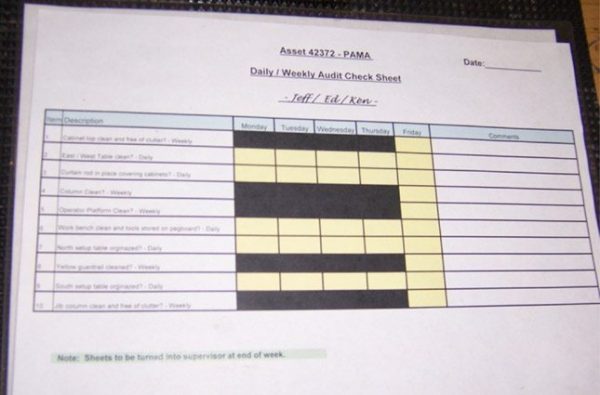 Observation: Observing an entire process with a gemba walk is a less common use for the tool, but can be powerful. In this case, a complex process – engine assembly – needed lead-time improvement. Where to start, however, resulted in several false starts over the years. Using gemba walks in a repetitive fashion over a period of weeks revealed a host of truths despite the complex, shared-asset, multi-department flow, including:

The gemba walk also revealed that the demand amplification was leading to increased batch sizes upstream (see Figure 6). Those process steps closest to the pacemaker – and closer to the customer – had the best information and least variability in quantity. Moving upstream it was clear that hedging drove ever-larger batches, despite the process stability as far as the pacemaker and customer were concerned, seen as the expanse of variability between the first and third quartiles.

Value-add location: Walking the entire process with successive gemba walks showed an unexpectedly idle inventory picture. It showed an average of about 400 percent excess WIP, as shown in Figure 4. The enterprise resource planning program had not provided this insight. In fact, according to the regularly examined outputs, the process appeared to be healthy and to have the right amount of inventory.

By directly observing the value being added, the team realized that:

Teaming: A deeper truth was also revealed: the operators and the process would greatly benefit from cross-training. There were pockets of operators who were anchored to their machines and spent the majority of their time “babysitting” automatic machines. It had not previously been clear how significant the non-value added time was in the process; operators could drop process lead time by about 80 percent if they were freed up to continuously add value. To practitioners, this is a common observation. Resources were reprioritized and the strategy shifted from 6S and setup reductions to cross-training. The combination of 6S and setup reductions, while helpful, represented sub-optimization at the local level and missed the strategic benefits that could be realized by a cohesive team across a complex process.

Observation: A gemba walk in an office is the same as one on the shop floor. The goal of the gemba walk in this instance was to shrink the lead time needed to convert a quote into a confirmed order. The walk began with observation of the customer service department – the location of the order entry process. The team observed a widespread phenomenon that no one previously voiced – interruptions! Seventy percent of the time, customer service representatives were interrupted as they were converting a quote into an order and inputting it into the sales system. For practitioners this is a common finding, but the team was shocked. They were equally shocked that it took them two to four times as long to complete the order entry when they were interrupted. This observation led to creating a dedicated area for converting a quote into confirmed order that would be physically removed from routine interruptions.

An equally surprising finding was the practice by customer service representatives of prioritizing their efforts with the most difficult quote conversions and setting aside the easy conversions for later completion. This counterintuitive action was so ingrained that the customer service team did not question it until the gemba walk participants asked why some conversions were being set aside. Not even the area supervisor had questioned this practice.

Value-add location: Seeing what happens where it happens showed a proliferation of various organizing strategies being practiced by individuals. By observing the actual work being done by each customer service team member, patterns in the process emerged – even though representatives believed each quote conversion was unique. By getting everyone together, a standard work plan, along with a plan for cross-training, was developed.

Teaming: Next, the customer service team members visited the Pama machining center to do a gemba walk with the operators on how they could organize their work into a fluid process using visuals and by redesigning their area. This opened up the floodgates of creativity because the floor team had not related shop improvements to the office. After this walk, the team unlocked a 75 percent lead-time reduction in the span of a month and maintained it for the next year (until the time this article was written). It is unlikely that such a steep improvement would have occurred without the gemba walk.

Gemba walks are a deceptively simple and oft-underutilized tool for identifying problems in processes. By relaxing preconceived notions and observing the “real thing,” process improvement professionals are far more likely to engage a team in the true spirit of continuous improvement so that work is faster, safer, easier and better. Gemba walks can be used when more collaboration and raw process input is needed in order to overcome flawed thinking or a complex problem beyond usual data analysis. Continuing to practice observation and problem solving on gemba walks can help advance an individual’s personal development from practitioner to master.

View Profile | View all posts by Russell Lindquist
The Many Sides of a Gemba Walk
Six Sigma 2.0 Manifesto