Problem-solving teams are equipped to help leaders break through vexing operational challenges that impair customer satisfaction. Often, there are more challenges than resources, and staying focused on the most critical problems is imperative. This case study describes how a team redirected its efforts toward strategic needs.

New OPI leadership reviewed its project listing and training records and realized its team was focusing too much energy on training and support of low-priority projects.

OPI team members, however, were not reviewing all possible problem-solving opportunities across the departments to identify key themes of a strategic nature. For example, overtime hours might be a concern to a few departments, resulting in training or small improvement projects. The better response would be to examine the organization’s total overtime performance using root cause analysis tools.

Through OPI team discussions, the team members agreed to investigate how it delivered support to internal partners, in order to raise the level of problem-solving in the city. OPI leadership suspected the team needed to become more of an internal management consulting unit emphasizing strategic work.

Use Simple Questions to Collect Data

One Program, Many Projects

OPI worked with Performance Partners and other key leaders to implement a series of changes in how OPI operated. This collaborative approach helped OPI’s internal partners improve their internal processes by seeing firsthand how OPI managed its change efforts. The improvement projects included the following: 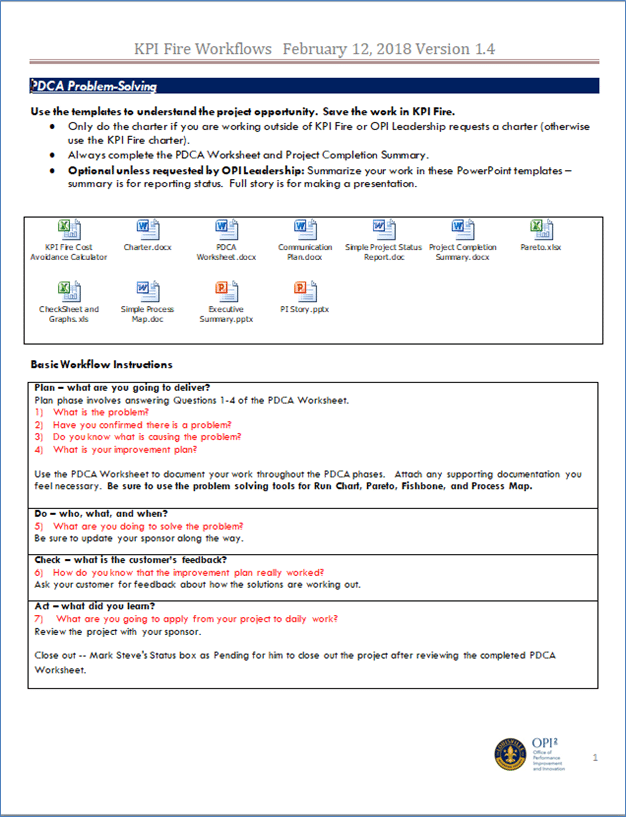 Improvements to the training approach resulted in more than 500 employees giving OPI a rating of 9.5 out of 10. More strategically, over 15 projects were commissioned following training – including six new visual boards and six applications of 5S. The projects for visual boards and 5S were accomplished in less than one month per project, and the cost avoidance savings totaled $299,520.

As valuable as these benefits are, the more important result of OPI’s tune-up is a renewed focus on strategic projects. All projects are now reviewed and prioritized against city and department plans before decisions are made about acceptance and execution. The visual boards and 5S projects, for example, are part of a broader city initiative to be a 5S city.

Keep your problem-solving priorities focused on strategic work. Examine your work. Use the assessment tool as a starting point to improve. Engage your internal partners. Good luck!