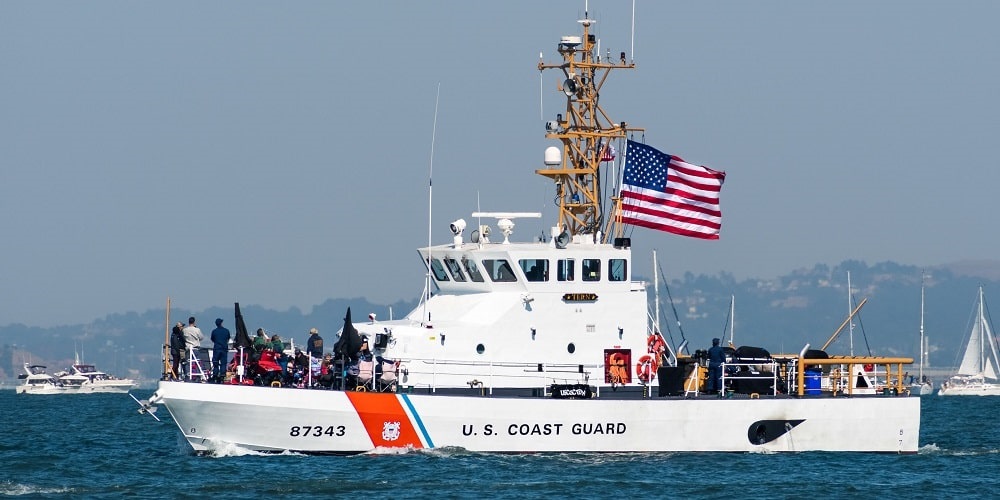 The local senior leadership of the U.S. Coast Guard Finance Center was confronted by the problem of maintaining high levels of service in its accounts payable (AP) process in the face of increasing process complexity. Compounding the issue was the fact that the center’s information technology (IT) systems had been modified to accommodate the growing complexity without a comprehensive business process review, which in turn added even more complexity, resulting in a vicious and endless cycle.

An area of particular concern for the local senior leadership was the accounts payable process supporting TSA. It wanted this process to be world class and become the standard process for all their accounts payable services. The finance center leadership was convinced the process used the correct basic financial system tools and architecture for long-term sustainability, but the complexity of this process had grown since its inception of just two short years before. This complexity (Figure 1) over-stressed people, processes and systems with re-work loops, delays, errors, penalties, duplicate payments and more. The center was in a bind, and bringing in additional resources was not an acceptable option. 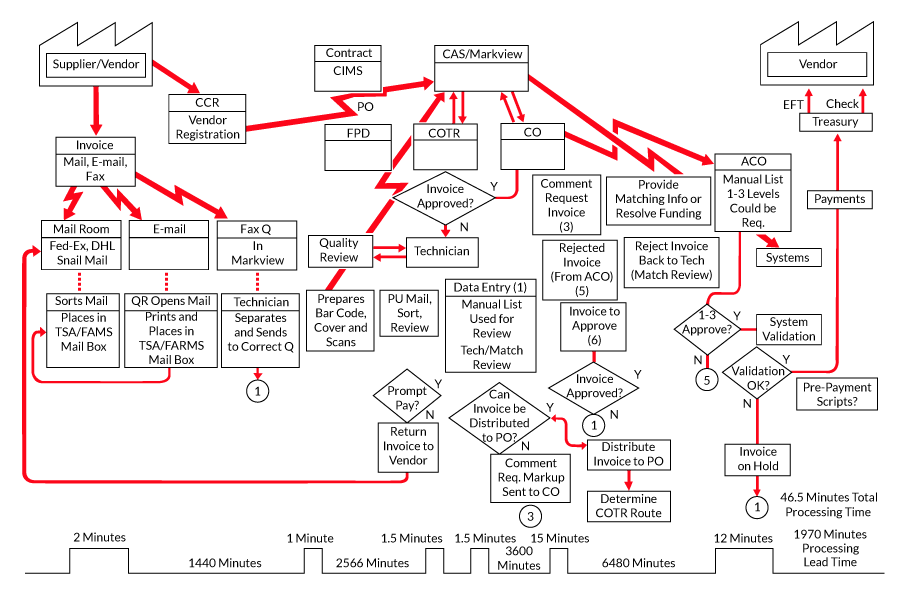 But the center’s senior leadership had a strategy for success: Bring in an experienced Lean Six Sigma consultant with a finance background to lead the project team, break through the complexity, and design a Lean, effective and scalable process.

Handpicked Content:   Apply Lean to Save the Planet and Your Marriage

Where did the project team start? It began with a value stream map, then it identified where the non-value-added time was spent. Next, the team developed a measurement system so that it could determine how much time was spent in these non-value-added areas. In addition, the team began to measure queue volumes by specific activities over time within the process. For example, during the initial analysis, the team determined from the Define and Measure phases of a DMAIC (Define, Measure, Analysis, Improve, Control) project:

Some tough questions were asked and that forced many process owners and stakeholders to re-think why they were doing things the way they were. Finally, the project team measured the voice of the customer by conducting a phone survey with their TSA customers. Many Lean Six Sigma tools, such as process mapping, cause-and-effect analysis, failure mode and effects analysis, and basic statistical analysis, were used. In addition, two Kaizen events were conducted. This resulted in some quick wins.

One of the Kaizen events, in particular, produced tremendous results in the authorized certifying officer (ACO) invoice approval queue. This queue contains invoices that had already been entered into the system, and were approved by the contracting officer and his or her technical officer. The ACO invoice approval is the final step in the center’s payment approval process before the invoice is submitted to the U.S. Treasury for payment.

This specific ACO queue was identified through the value stream mapping exercise as a constraint in the process due to the high level of items in the queue (an average of 175 invoices daily with spikes to nearly 700 at times). When the level of invoices spiked, overtime was required to process them. In one Kaizen event, code-named “Queue Blitz,” the ACOs did nothing other than review and approve invoices. After 10 days with intense focus, the queue reached an all time low of one invoice in the queue. That was almost a 100 percent reduction in work in progress (WIP) as shown in Figure 2. 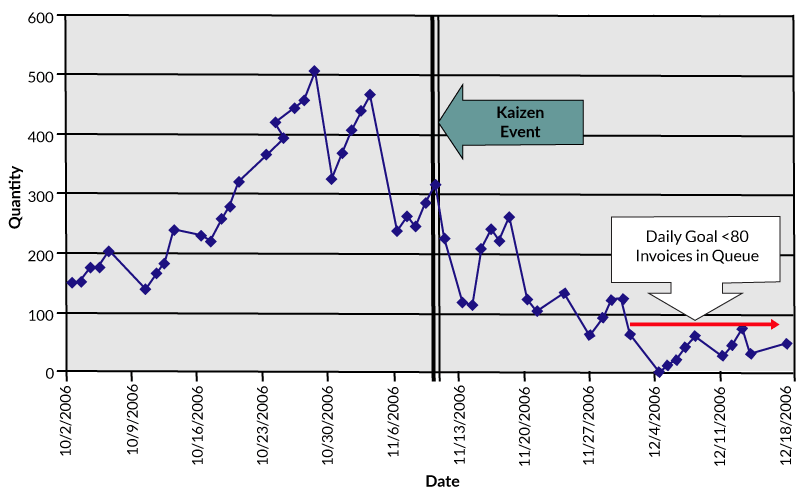 The next step was to maintain an acceptable level of WIP, and institutionalize this as a daily goal. The team determined that one day of WIP would equate to 80 invoices in the queue. (This was based on four ACOs reviewing and approving 20 invoices a day in addition to their other duties.) The finance center management teams are currently using control charts to manage the WIP to no more than 80 invoices a day with a stretch goal of 50. With this revised process, the level has never exceeded 83, resulting in little need for overtime and a reduction in interest and late penalties.

More Plans for the Future

This effort has begun to “turn the ship around,” but there is more ground to cover to get to a world class process. By utilizing the Lean Six Sigma methodology, the finance center now better understands where the pain lies (the root cause) and has already started developing improvement plans aimed at reducing the complexity and streamlining the larger process. The team identified process and management improvements that could be implemented quickly and expected to be completed with the Improve phase by the second quarter of fiscal 2007. After the process changes were implemented, the team defined areas requiring software changes or the use of new software tools, defining the requirements and performance outcomes for these software changes that will be given a high priority for completion and implementation

View Profile | View all posts by Mike Donnelly
Design for Six Sigma ResearchWhen, where and why companies use DFSS and the financial benefits it delivers
New Six Sigma Standard for Sustainable Financial Benefit